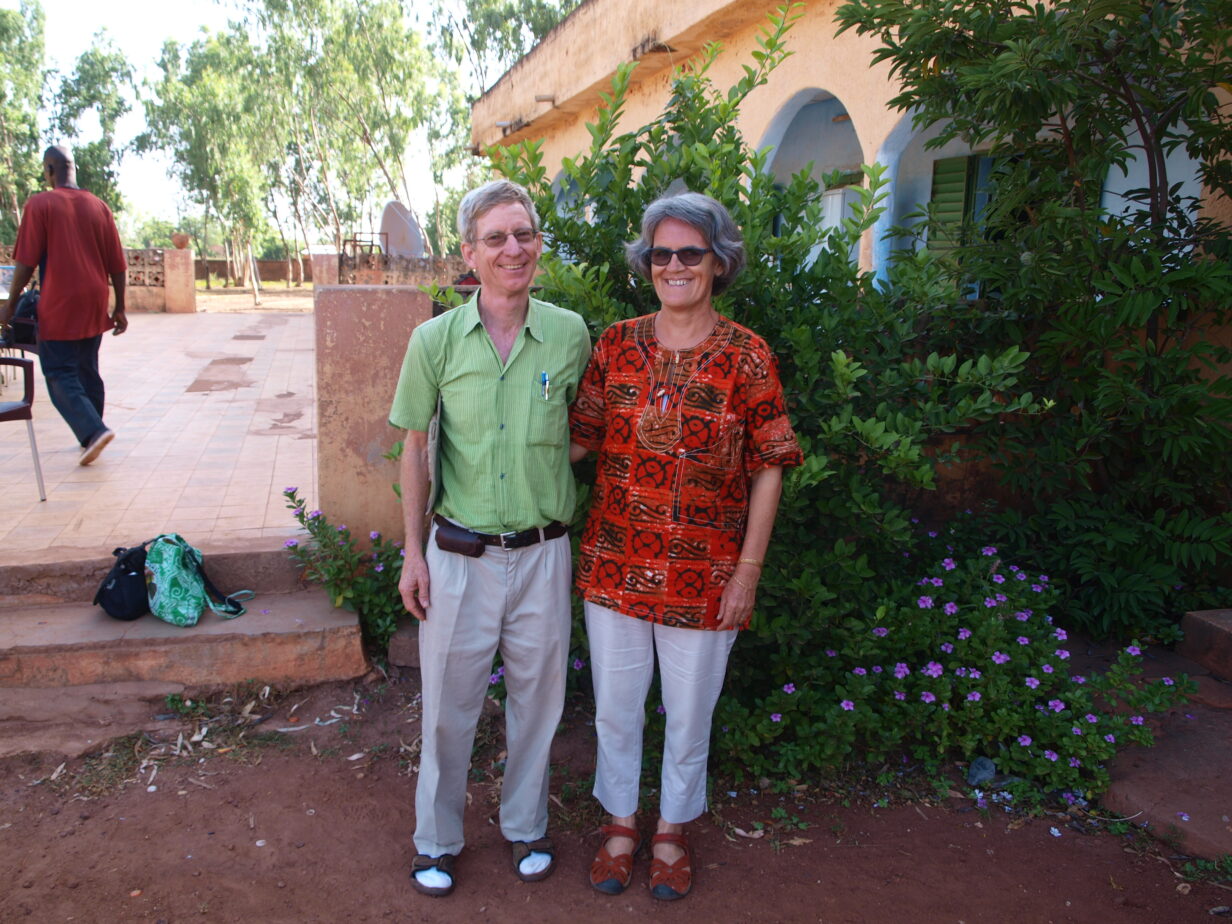 For over 30 years working as plant breeders in the tropics, Eva  and Fred Weltzien-Rattunde were motivated by the need and joy of contributing to agricultural development for and with smallholder farmers. Throughout their joint work in very different countries, from India to Mali and its neighboring countries in West Africa, several common themes emerge.

Focus on farmer participation, building on local knowledge and expertise:

Eva and Fred found their status as ignorant outsiders advantageous, as the need of farmer’s input and participation to focus and implement an effective breeding program was beyond question. On-farm progeny testing with farmer and breeder collaboration provided the entry point. These trials both helped obtain results pertinent to farmers’ environments and management practices and enabled wide ranging discussions on crop adaptation requirements, trait preferences and production objectives for different farmers. Through such discussions, joint understandings of opportunities for crop improvement and ways to collaborate for more effective breeding evolved.  Over time it became clear that collaboration was helpful in all steps of the breeding process, from joint setting of breeding objectives and generating diversity through progeny selection and varietal performance testing. This joint learning was also advanced by collaborating social scientists who helped with communication tools and understandings of women’s vital roles and contributions to production of what was considered a “men’s crop”.

Focus on use of local germplasm, building on the germplasm that farmers cultivate, maintain and improve over generations:

The emphasis placed on using local germplasm brought advantages for breeding per se, by retaining numerous adaptation and quality traits, i.e. traits required for new varieties to be useful for and adoptable by smallholder farmers.  Furthermore, by improving the local germplasm they could contribute to the conservation and continued use of this germplasm, with its productivity and quality able to compete with introduced, non-indigenous, crops and varieties. The creation and improvement of populations based on local germplasm but “spiced” with novel genetic diversity is an approach that they pursued with pearl millet in India and sorghum in West Africa. New varieties that retain the local grain qualities required for good “food yield” but having new “short” (2.5m) stems of better quality for feeding livestock is one outcome of this approach. Hybrids produced on newly created local (Guinea-race) parents is another example. These hybrids out yielded the farmers’ own local varieties by 30% under both low- and high-productivity conditions while retaining the local grain type, with good grain-mold resistance and minimal losses during grain processing.

Formal training activities included advising students and interns and conducting training workshops for national program breeders. However, joint project development and implementation was at least equally important for capacity building, whereby farmer organization, national breeders, and NGO partners “learned by doing”. The collaboration of various partners in the formulation of new projects and their subsequent implementation was based on continual joint learning. Although “informal”, explicit practices promoted this learning, such as variety testing only in villages where women, as well as men, conducted trials in their own fields, and the annual feedback and planning meetings where farmer-testers and researchers shared results and decided on follow-up activities. Specific training sessions on topics such as on-farm trial management and evaluation, hybrid seed production techniques, and seed marketing options were organized as opportunities and needs arose. The methods for farmer-breeder collaboration that evolved through this process were also documented in publications and training manuals.

Focus on nutrition, a key to achieving impact and inclusion of women’s expertise:

Understanding the critical importance of “designing in” nutritional-value in all breeding and seed-related activities arose through discussions and inputs from farmers as well as social scientists and nutritionists. In retrospect, Eva and Fred see how the farmer-participatory approach to breeding and seed activities was essential for “discovering” major opportunities for improving nutritional outcomes.  For example, the concept of “food yield” rather than harvested grain yield only as a key trait for selection, first emerged in an evening fireside conversation with village men about which of the many observations made in that day’s culinary testing really mattered. A varieties’ susceptibility to losses during grain storage or processing is therefore at least as important as the amount of grain it produces. It is the women, however, who most critically observe grain quality as they decorticate (pounding to remove the seed coat) and cook the flour that they produce. Their judgement of a varieties’ acceptability can ultimately decide whether a variety is cultivated or not. Furthermore, it was the grain that women produced in their fields that was specifically used for feeding young children. Women’s production of varieties “bio-fortified” with high micronutrient contents (and adapted to their intercropping systems), and women’s use of whole-grain processing and cooking techniques, were thus revealed as promising pathways for reducing anemia (80% for children under 5 years) and child mortality (under 5 years) (>20%) in Mali and West Africa.

Networks for collaborative variety creation and dissemination evolved over years of joint engagement of breeders with farmer organizations, extension agents, and NGO partners. These networks originally focused solely on creating new varieties, but extending into seed production and dissemination activities based on the initiatives of a few collaborating farmers. These farmers were keen to improve access to seed of newly created varieties in the absence of seed companies capable of serving the millions of smallholder farmers who typically rely on their own seed or that of trusted community members. Such decentralized farmer-breeder networks offer advantages for indigenous staple crops by building on farmers’ expertise, enabling greater proximity, knowledge and trust between key actors, conforming to social values and norms for accessing seed, and responding to the diverse varietal-preferences and production-objectives of farmers in each area.

The participatory breeding and seed system development that Eva and Fred pursued, together with many partners, was recognized by the King Baudouin Award for pearl millet research (1996) and the Justus von Liebig Award for World Nutrition (2015).

Eva and Fred greatly appreciate the institutional support from the International Crops Research Institute for the Semi-Arid Tropics (ICRISAT) that enabled their long-term work in India and West Africa. Since their retirement from ICRISAT in 2016, Eva and Fred are based in Germany but remain active in international agricultural development work. They currently support seed-system development projects in Tchad and Burkina Faso and are preparing an on-line course introducing an “actor-oriented” approach for sustainable and inclusive seed system development.  Methodology for farmer-participatory breeding and gender inclusion is another of their focus areas. They currently advise projects in both West and East Africa and Eva is training teams of plant breeders and social scientists through the GREAT « Gender Responsive Researchers Equipped for Agricultural Transformation » Project.

Eva and Fred greatly value their appointments as Honorary Scholars with the Agronomy Department. Maybe surprisingly, they see their association with the Agronomy Department and belonging to a Malian extended family to have important similarities. Both are dedicated to addressing the biggest challenges for this and coming generations: producing food and sustaining environmental and biotic resources – “healthy system development”. Likewise, both involve “family” members whose collaboration, with their diverse skills and resources, enable achievements that can’t be attained alone.