The Food Systems Stability Initiative is a collaborative project with engagement from academia, government, private sector business and civil society organizations who are working together to better understand the potential causes and outcomes of catastrophic food systems failures on people, ecosystems and economies. The menu below contains a number of the projects and publications that have developed out of this work over the past few years.

The Risk of Multiple Breadbasket Failure in the 21st Century: A Science Research Agenda 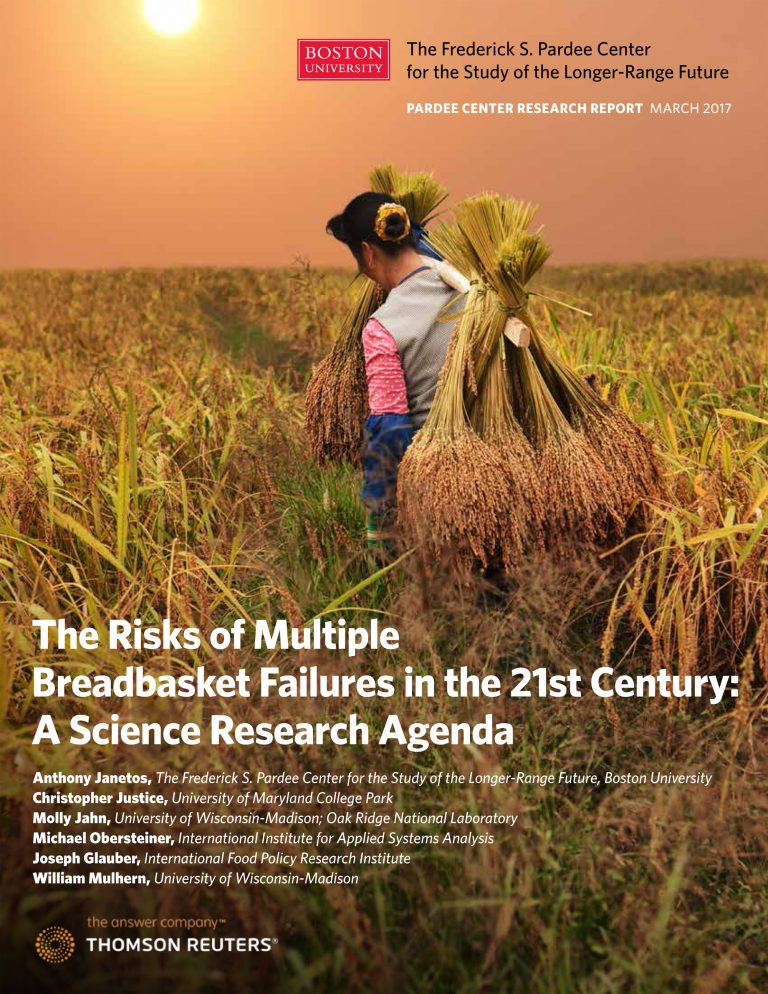 According to the UN’s Food and Agricultural Organization (Statistics Division 2016), a relatively small area of the world, 23 percent of total cropland, accounts for a large proportion of total global cereal production, with most of the area devoted to three major cereal crops: maize (70.3 percent), wheat (69.3 percent), and rice (84.5 percent). In a recent study of global hotspots of heat stress due to climate change, Teixeira et al (2013) showed areas of Central Asia, East Asia, South Asia, and North America, which include the major grain producing areas of the world, as being particularly vulnerable. The structure of globalized food systems, with major constrictions in trade flows and highly concentrated areas of the world’s food production, creates obvious vulnerabilities. Systematic evaluation of the likelihood of disruptive events in relation to each other and their potential impacts has not been done.

Written by an interdisciplinary team of leading researchers, this report describes a science research agenda toward improved probabilistic modeling and prediction of multiple breadbasket failures and the potential consequences for global food systems. The authors highlight gaps in the existing empirical foundation and analytical capabilities and offer general approaches to address these gaps. They also suggest the need to fuse diverse data sources, recent observations, and new suites of dynamic models capable of connecting agricultural outcomes to elements of the global food system. The goal of these efforts is to provide better information concerning potential systemic risks to breadbaskets in various regions of the world to inform policies and decisions that have the potential for global impacts.This report stems from an international, interdisciplinary workshop organized by Knowledge Systems for Sustainability and hosted by the Frederick S. Pardee Center for the Study of the Longer-Range Future, with support from Thomson Reuters, in November 2014.The authors include:

Anthony Janetos,* The Frederick S. Pardee Center for the Study of the Longer-Range Future, Boston University

On March 26-27, the “Expedition Hacks-LA” hackathon took place with the goal of empowering creative teams of hackers to show how geospatial information can be used to better model, visualize, and monitor the nexus between food security and regional stability. A group of students from the University of Southern California won the hackathon for their project, “Optimizing Fishery Distribution to Drought Regions“.

The Jahn Research Group at the University of Wisconsin–Madison supported the successful deployment of the hackathon. The Jahn Research Group activated its networked institutional and professional connections, including drawing on the Jahn group’s past leadership of the Agricultural Innovation Prize – the largest student-focused agricultural competition in the world – to support publicizing the hackathon and to spur participation from student teams across the country. Engagement in this support role contributed the success of this hackathon and will continue in the months to come by leveraging hacker output to inform innovative approaches.

Members of the Jahn Research group were commissioned by Lloyds of London to develop a scenario of an acute but plausible disruption to global food production and its consequences and implications for insurance and risk.

Are you interested in following the discussion? Check out this Weather Underground piece about the likelihood of a food system shock:

UK-US Taskforce on Extreme Weather and the Global Food System

Members of the Jahn Research Group collaborated with experts from the UK and US to outline key recommendations to safeguard against threats to the global food supply in a report by the UK-US Taskforce on Extreme Weather and the Global Food System. The report highlights an increasing risk to global food supply disruptions and price spikes that could result from extreme weather events – such as heatwaves, droughts and floods – and offers new recommendations for mitigation.

The report identifies a need for agriculture to adapt to a changing climate and become more resilient in the face of extreme weather, while at the same time increasing productivity to meet an increasing global demand for food. 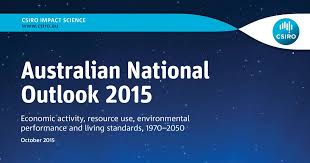 The National Outlook is a ground-breaking attempt to model and analyse Australia’s physical economy and natural resource use out to 2050. This report provide the most comprehensive analysis of its kind. It focuses on the emerging water-energy-food nexus, and the prospects for Australia’s energy, agriculture and other material intensive industries, with particular attention to potential synergies and trade-offs within and across economic sectors.

Read the report in Nature

Global Food System Stability and Risk: At the Nexus of Defense and Development 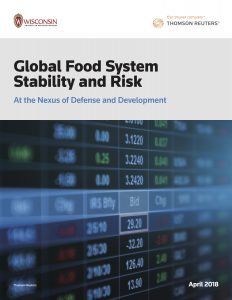 The introduction of the conceptual frame of “food systems,” a term applied from global to very local scales, has been a crucial advance resulting from post–9/11 applications of more sophisticated approaches to supply chain integrity and cybersecurity. This paper reviews the opportunities afforded in a world awash with real-time and near real-time data to better reflect and inform the ways in which both risks and opportunities in our food systems are managed.

Driven by both traditional and gray zone conflict across a wide spectrum of intensity and stresses, 2017 saw one of the worst years for famine since World War II, and also one of the largest human migrations in the history of humanity. These trends set the stage for novel approaches to identify opportunities using familiar and new data and visualization techniques to illuminate and scrutinize major vulnerabilities that cut across many traditional boundaries toward securing more stable food systems, and therefore more peaceful, equitable and prosperous futures for all.

See this link for a Thomson Reuters blog post summarizing this work and its consequences.

The authors of this report include:

Food Chain Reaction: A Global Food Security Game is an international simulation based in the near future during a global food crisis. In November 2015, 65 thought leaders and policy makers from several countries came together in Washington, D.C. to participate in the exercise. Teams of participants represented governments, institutions, and businesses and responded to a global food crisis caused by population growth, rapid urbanization, extreme weather, and political crises. Professor Molly Jahn was selected as the head of the adjudication panel for the game.

The game put the issue of food security at the forefront of a global conversation and teams were able to see firsthand via the simulation what the future of food security could look like in an increasingly volatile world. Trade, climate, and security emerged as big issues in global food security and teams found that the actions of a few could affect the many. As pressures increased, teams found they needed to work together to effectively deal with food security challenges. Please see the links below to learn more about the findings from the game.

In 2017, Dr. Jahn and colleagues organized a webinar as part of a series hosted by the World-Wide Human Geography Data Working Group (WWHGD). The webinar, entitled “Global Data and Mapping to Understand Food Insecurity,” was attended by over 175 individuals across the world, and included 6 wide-ranging talks from experts working at the nexus of food insecurity, data science and human geography.